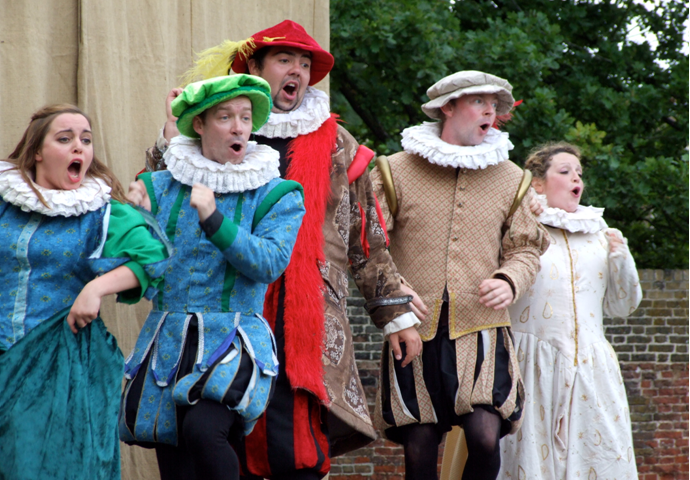 Award winning outdoor theatre company Illyria will bring their fabulous production of The Merchant of Venice to Cockington Court on 27 July.

Marissa Wakefield, Cockington Court Centre Director, says: “It’s fantastic to have Illyria back at Cockington Court again this year. Every year they wow us and the audiences with their fun-filled performances. We can’t wait to have them here in July and August.”

The Merchant of Venice is a funny play that deals with serious issues – in particular the keeping of promises.

Shakespeare’s great courtroom drama is by turns gripping, funny, romantic and thought-provoking. Illyria promises a production to keep you on the edge of your seat!

Oliver Gray, Illyria’s Artistic Director, says: “Illyria has given more performances to more people across a wider area than any other open-air touring theatre company. We’re really pleased to be performing at Cockington Court and can’t wait see how the audience reacts.”

Now in its 27th year, Illyria has delighted audiences the length and breadth of the UK, and in the Netherlands, Germany, Switzerland, France, the United States and Canada, performing some of the well-loved productions on offer.

The company has won four international performance awards and attracted numerous 5-star and Critics’ Choice reviews for its approach to Shakespeare’s plays.

Illyria’s fast and furious madcap style is popular for the whole family, from theatre devotees to live performance newcomers.

Illyria has four shows touring across the UK this year: including Shakespeare’s The Merchant of Venice and Hugh Lofting’s The Adventures of Doctor Dolittle, which will both be performed at Cockington Court.

To find out more about Illyria’s performances at Cockington Court and to book visit the website.